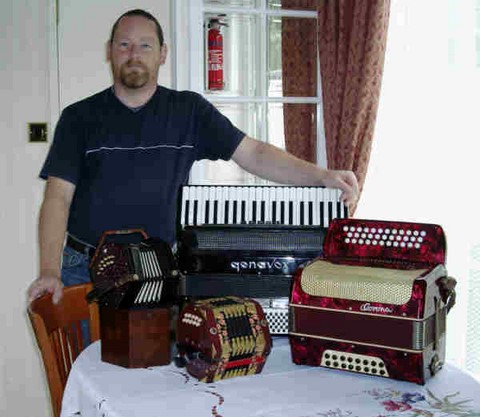 This was me in 2002 with just a few of those things you love to play and I Iove to restore.
Everything here with the exception of the Melodeon was a major rebuild, the Lachenal was a pile of bits from Australia! and the German concertina a bag of dust from years ago.

In the early years I operated from a second bedroom but since 2005 have had a dedicated workshop with plenty of space and equipment to undertake any repair or restoration work. 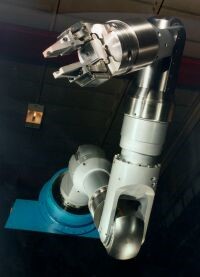 I've not always been a restorer of these things; my first love from being 10 years old was electronics and  I graduated in Electrical and Electronic engineering in 1983. Eventually I became a Principal engineer for an engineering company in Lancashire in 1990.
The 'Commander' manipulator on the left was the last major project that I was involved with as a full time engineering 'employee' and was responsible for the electronics.
I became self employed in 1996 and between then and 2002 I basically traveled the UK, North and Southern Ireland and mainland Europe doing similar work for many people.
I've also worked in the USA several times, and ended up as far away as South Korea at one stage.
Visiting the particle accelerator at CERN as a robotics engineer was a major highlight (despite being iradiated by the anti-proton generator!)
'Fiddling' about with all things mechanical and designing electrical and electronic control systems for various people in that 20 years or so was an extremely satisfying experience. 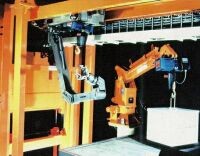 Many moons ago, the robotic 'cells' shown became the first to go into the nuclear fuel reprocessing plant at Sellafield in Cumbria in order to decommission part of the plant.

The old pilot cell in which the process was first tried in the 1950's needed to be cleared and this lot was required to remove it. My responsibility was for the design, build and commissioning of the electrical control system(s).

There are more important things than all of the above of course and they are my wife Jenny and my daughters Laura and Lisa. I am also blessed with 2 lovely pre-school grandaughters Emily and Evie (mum Laura).